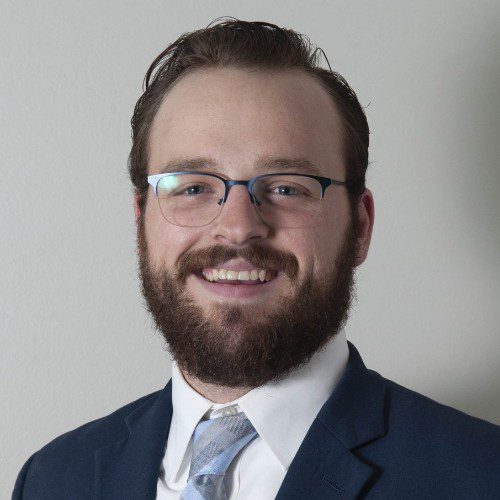 Andrew joined RDM as an Associate Attorney after graduating from the University of Iowa College of Law in the spring of 2022.

While in school, Andrew was a law student volunteer at the U.S. Attorney’s office for the Northern District of Iowa in Cedar Rapids, IA. Andrew also spent time as a research assistant to Professor Mihailis Diamantis where he focused on issues of corporate criminal law. During his final year at the University of Iowa College of Law, he served as an articles editor for The Journal of Corporation Law and was a member of the Baskerville Moot Court Team. Andrew also found success in various sports law-related endeavors, placing runner-up at Tulane University’s International Baseball Salary Arbitration Competition and winning the Sports Lawyers Association’s Student Writing Competition.

Outside of the office, Andrew enjoys partaking in a round of golf and an evening of trivia with friends.

Andrew and the associates at RDM are eager to bring the best possible outcome to your case. Through the mentorship of RDM’s nationally recognized litigators, our talented young associates are poised to be the best in the field.

The Missouri legislature passed Mo. Rev. Stat. § 510.261 in 2020. The statute aimed to limit the frequency and sum of punitive awards. In advance of this aim, Mo. Rev. Stat. § 510.261.5 states that “[n]o initial pleading in a civil action shall contain a punitive damage award.” The section goes on to establish that the trial court must serve as a gatekeeper, granting plaintiffs leave of court to plead punitive damages only after a plaintiff shows “a reasonable basis for recovery of punitive damages” through “affidavits, exhibits, or discovery materials.”

The statute has now been in effect for a little over two years and has faced multiple challenges alleging the statute violates the Missouri State Constitution. Despite strong challenges from plaintiffs, the statute has been enforced in state courts throughout Missouri.

Defense counsel across the state have moved to strike punitive damage claims from initial pleadings filed after the statute’s activation date. Plaintiffs’ counsel have responded by asserting that the statute violates Article V of the Missouri Constitution, which states that “[t]he supreme court may establish rules relating to practice, procedure and pleading for all courts,” because the new statute conflicts with a procedural rule rightfully promulgated by the Missouri Supreme Court. This argument relies on the Missouri Court of Appeals ruling in State v. Emerson, which held that “if there is a conflict between [the Supreme] Court’s rules and a statute, the rule always prevails if it addresses practice, procedure or pleadings.” 573 S.W.3d 93, 102 (Mo. App. W.D. 2019). Plaintiffs have also claimed that the statute conflicts with the Missouri Rules of Civil Procedure and that the evidentiary standard and leave of court requirements violate the right to a jury trial found in Mo. Const. Art. 1 § 22(a).

Defendants have, to this point, been successful in enforcing the statute. At least three separate circuit courts have rejected plaintiffs’ arguments claiming the statute violates the Missouri Constitution and granted motions to strike punitive damage claims. There is not yet a written opinion explaining any court’s precise reasoning for upholding the statute, but defendants have advanced multiple persuasive arguments to rebut challenges.

…and Successes for Plaintiffs

While the statute continues to enjoy veiled but consistent enforcement in state court, plaintiffs have been successful in defeating defendants’ motions to strike in federal diversity actions. District Courts in both of Missouri’s federal districts have held that the statute is inapplicable in federal diversity cases because the Federal Rules of Civil Procedure “answer the same question.” See generally Davis v. ALS Express Trucking, Inc., 2022 U.S. Dist. LEXIS 140486. Plaintiffs’ counsel looking to avoid the new pleading requirements may start looking toward federal courts so long as parties are diverse. Plaintiffs have also been successful in limiting the statute’s application to only those cases filed after the statute’s trigger date of August 20, 2020. See generally Largent v. Pelikan, 628 S.W.3d 162 (Mo. App. E.D. 2021).

For the time being, it appears that Mo. Rev. Stat. 510.261.5 has survived initial constitutional tests. But plaintiffs’ counsel will certainly continue to bring forth challenges. The defense attorneys at Rasmussen Dickey Moore are prepared to employ all tools available to protect your business from punitive damages claims. Contact RDM today to discuss your case.

The Carrot and The Stick

The setoff provision acts to encourage parties, particularly defendants, to engage in settlement negotiations within one year of filing. Under the Amendment, the interest does not apply to any amount totaling a defendant’s settlement offer which is 1) in writing, 2) made within 12 months of filing, and 3) either expressly rejected by the plaintiff or not accepted within 90 days. The Amendment acts as both the carrot and the stick, encouraging early settlement offers through interest relief while punishing a failure to offer a settlement with the potential for interest added on top of traditional damages and post-judgment interest.

Immediately after the Amendment’s passing, defendants in Cook County, Illinois, filed a motion arguing that the Amendment violated the Illinois Constitution. On May 22nd, 2022, in Hyland v. Advocate Health and Hospital Corp. (No. 2017-L-3541), the Court rendered its judgment in favor of the defendants. Specifically, the Court held that the Statute violates the Illinois constitutional guarantee to a trial by jury and its prohibition of special legislation.

The Right to Trial by Jury

Article I, Section 13 of the Illinois Constitution of 1970 provides “the right of trial by jury as heretofore enjoyed shall remain inviolate.” Inherent in this provision, according to Illinois courts, is the right a jury’s determination of damages. Defendants argued that mandatory pre-judgment interest violates the right to a jury’s determination of damages, and the Circuit Court in Cook County agreed. Interestingly, the Court noted various jury studies which indicate that juries already include pre-judgment interest, at a rate above inflation, in their damage awards.

Article IV Section 13 of the Illinois Constitution of 1970 prohibits special legislation, which acts “to prevent arbitrary legislative classifications that discriminate in favor of a select group without a sound, reasonable basis.” Best v. Taylor Machine Works, 179 Ill.2d 367 (1997). Defendants argued, and the Court again agreed, that a pre-judgment interest regime serves as special legislation and therefore violates the Illinois Constitution. The Court held that the Amendment unjustly discriminates in favor of personal injury and wrongful death plaintiffs and against plaintiffs in other tort suits, along with those defendants who were served over one year after the case was filed.

It is certain that we have not heard the last on the Amendment’s constitutionality. After the decision in Hyland, the Cook County Circuit Court issued a general order that anticipates a further ruling from the state’s higher courts. The status of the Amendment will likely remain in flux until the Illinois Supreme Court brings finality to the issue.